The Stamp Market - A trader's view

I spent the last 18 years in the Finance Industry -- the world of stocks, bonds, Fed monetary policy, breaking news and screaming traders. I was fortunate. Upon leaving that business in late 1999, with the constant help of my wife Deborah, I managed to slide us right into our full time Internet stamp and Postal History business. Our quality of life has never been greater, and I have found that many of the skills learned in "the markets" are very useful and easily transportable to our new occupation.

One of these skills is market analysis. While I will never pretend to be a full time market analyst, every trader must be able to make observations about what he sees going on around him, assimilate the data and develop a "world view" from which to operate. The stamp market, while "just a hobby" is a market like any other, and is subject to market forces. It is certainly possible to enjoy the hobby of philately without ever being aware of, or caring about, these forces. In fact, most collectors do exactly that. If you are among that group, the rest of this article will hold little or no interest for you, however if you have ever wondered about the dynamics behind some of the stamp market trends of the last few years, the views of this ex-trader may hold some insights for you.

The most common refrain heard in discussions about the state of the hobby is, "there are too few young people taking up the hobby. The hobby is in a state of decline". There is no question that the first part of this statement is true. Stamp collecting is having a very difficult time competing for the hearts and minds of young people when pitted against their current activities of computers and computer games. As a father to one teenage son, and an uncle to seven others ranging in ages from 8 to 15, I can vouch firsthand for the difficulty of generating an interest in stamp collecting.

Part of the problem is the current general impression of stamp collecting as an activity for "nerds". Recently, I watched a television episode of "Relic Hunter", certainly a show for teenage boys if there ever was one. When Tia Carrera, the sexy star, asked another character, a CIA agent, what he did in his spare time he answered "I collect stamps -- anything wrong with that?". Her reaction of suppressed mockery and disbelief would have been a sufficiently clear signal to any aspiring teenage boy that this is not an activity to engender respect in the female population! Possibly a better answer would have been "I study the history of the world. My favourite medium is the stamps that have been issued for the last 160 years".

A dealer I met at a show last weekend told me an interesting story on this subject. He had a two year old complete set of Scott catalogs that he was determined to give to "the first kid who came to my table. It was a three day show starting Friday. I finally gave them away late Saturday afternoon!"

The lack of young newcomers, at least in North America and Europe, is a demographic fact. However the stamp market is not uniformly weak, there are many areas of dramatic strength. How can we explain this? In this writer's opinion, it's all in the demographics, but one must look at the global picture.

Here are some personal observations of portions of the stamp market, and how my trader's "world view" explains what I see.

Observation:
"Average" material of many previously popular countries has been dropping in price consistently for many years. By "average", I mean the type of material that the average country collector fills an album with, not sub-quality material. In other words, mint never hinged sets of the last 40 years, medium quality used stamps that are not particularly scarce, the sort of material that is easily found in the stock of any dealer who regularly stocks the area in question. The bulk of North American and European mint stamps of this time period now trade based on their face value, with much of it being recycled as current postage. On the other hand, earlier, better material of these countries is in strong demand. The definition of "better" is any stamp that one cannot reasonably expect a dealer to have in stock, one that must be "found", either because of scarcity or condition. 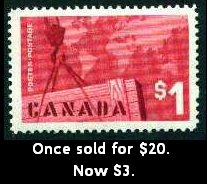 World view explanation:
Country collectors ("album fillers" in dealer parlance) are dying off faster than newcomers are taking it up. Those newcomers that are starting (or returning) see the state of the market for this material, and they also shy away and head for "more interesting" philatelic fields. The "album filler" was king during the heyday of the 1970's when everything that was bought from the post office went up in price (if not "value"). They formed the bulk of the collecting public. Also, the collectors of that time rarely bothered to be very picky, especially with used stamps. "Mint Never Hinged" ruled, and was almost the only thing that was important. For verification, look closely at the collections that were formed in the 1970's that many dealers are offering intact - you will quickly see the pattern. Now, nearly all collectors are searching for the stamps that need to be "found", not just bought from a pricelist. The result is more demand for the better items, and less for the readily available stamps, at the same time as the supply of the readily available stamps is increasing because so many of those 1970's "album filler" collections are coming on the market.

World view explanation:
These areas have had their ups and downs over the last few years due simply to local economies and the spending power of local collectors, but in general have done very well. Why? The answer lies in three elements: 1) twenty years or more of improving economies, leading to 2) the rise of a middle class with the money and desire to collect, and 3) the Internet.

The first two are demographics in another form. When we discuss the North American and European collecting population, we tend to ignore money, like it's a relatively constant element. However, this has not always been true! There is a reason all those Germany commemoratives of the late 1940's and early 1950's are so highly valued now -- nobody had the money to buy them during the reconstruction!

The availability of more spending power has created more collectors, of areas that were once unpopular in the rest of the world. The result is expanding demand for stamps with a limited supply, since why should anybody have put away stocks of something that was unpopular?

So what about the Internet? An axiom of trading is that "price cannot go up in a vacuum". For prices to rise, there must be some, limited supply. Then, when a collector sees the availability of desirable things, and becomes aware that he can purchase these things if he buys aggressively enough, he begins to do just that, competing with other collectors who have discovered the same joy from these items. The Internet has, almost overnight in historical terms, allowed collectors and dealers around the world to offer items to collectors in these expanding markets, soaking up the available supply in the rest of the world.

These are the growth markets for stamps in the future. Financially improved adult populations in Asian and some Latin American countries are replacing, on a global scale, the loss of the young population in the countries with a long standing philatelic population.