I am sure that everyone in the world with an email address has received dozens, if not hundreds of "Nigerian Scam Letters". They are now spreading beyond Nigeria, and coming from e-mail addresses in other places, including Europe and the UK.

Did you know that this is not a new phenomenon?

Most authorities will tell you that these "Nigerian 419 letters" (named after the legal code that applies to them) are a modern version of the very old "Spanish Prisoner" scam - a term that I am sure few people would have heard before the 1997 David Mamet film of the same name.

The idea behind these scams is that a valuable piece of property is being held by authorities, or in secret storage and needs some "bailing out", by the payment of bribes, storage fees, court costs, or some other excuse. Of course the entire scam is intended to extract this "advance fee" out of the unsuspecting (but greedy) victim, and to keep doing so with further "complications" until the victim is bled dry, gives up, or makes the (sometimes fatal) mistake of going to meet the con artists and putting himself in their power. The item was, of course, usually illegally (or at least semi-legally) acquired, encouraging the intended victim to maintain secrecy.

This leads to two questions: What has this to do with philately? and "Why was the old version called the "Spanish Prisoner" scam? An item I found recently should answer both questions at once.

This cover was mailed from Madrid Spain, to Keyser, West Virginia, USA on March 12, 1910. It is franked with 10c and 15c values of the King Alfonso XIII stamps of 1909, paying the common 25c UPU rate to the USA - nothing special so far. The surprise was inside.

I actually began to collect some of the Nigerian scam letters before they became so commonplace. I even have a few of the pre-email versions that were actually mailed. Imagine my delight when I looked inside this Spanish envelope and found an original Spanish Prisoner letter!

For your reading enjoyment, take a trip into the past: What has been will be again,
what has been done will be done again;
there is nothing new under the sun.
----- The Bible, Ecclesiastes 1:9, NIV 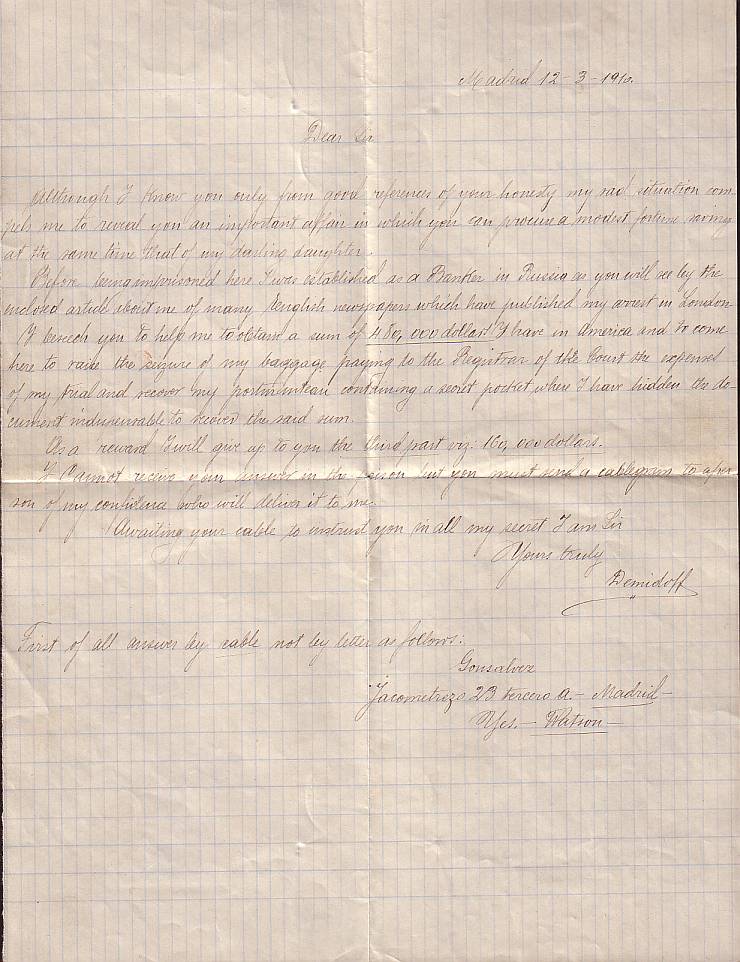